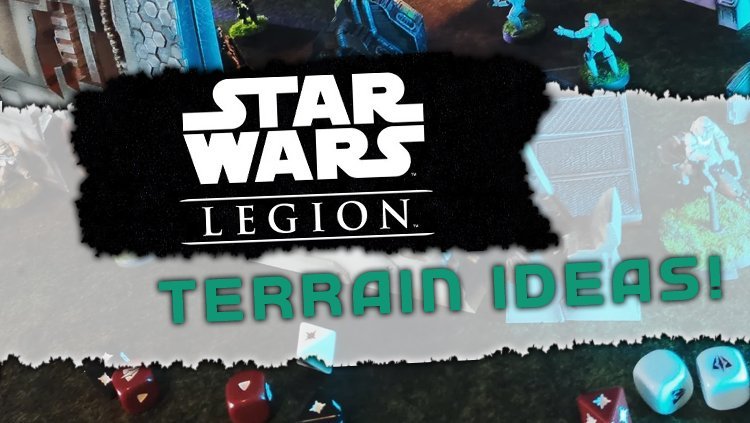 We’ve been loving Star Wars Legion at the Saucermen Studios and really appreciate the diversity of world building on offer when designing tables. Star Wars Legion Terrain comes in all shapes and sizes, so we’ve put together a few terrain ideas ideas to help you tell the best stories and play memorable battles in a galaxy far, far away…

How to build terrain for star wars legion

There’s many options for terrain including scratch built DIY terrain, MDF scenery, official plastic kits and 3D printable terrain, but we prefer to go the 3D printed terrain route as it’s affordable and delivers incredible detail! We’ve got some recommendations for which 3D printer to choose if you’re considering getting one.

How do you set up terrain in Star Wars: Legion?

Balance & fair placement – Ensure that the battlefield is placed without benefiting one side over the other. EG, elevation, vantage points, cover and ease of movement should be shared equally on both sides of the battlefield.

Make room for dice! – Don’t forget to make your table something practical to play on. Dice should be able to land flat and movement tools should have space to be used.

Choose a theme – Consider the narrative of your battlefield and choose terrain based around it.

Types of Terrain – Include a variety of terrain on your battlefield. Ensure you include larger, line of sight blocking objects, area terrain and smaller scatter terrain.

Battle amongst the wreckage of a crashed Star Destroyer or scavenge through the bones of a spaceship graveyard. You crash site can include walkways, gantries, broken engines and hull fragments.

Check out some painting tips for painting a spaceship graveyard

Destroyed by the imperial invasion or sabotaged by rebels, the battle damaged or ruined buildings off creat options for cover and verticality on the battlefield.

Crates and shipping containers make great options for cover as they can be sprinkled around the battlefield or added to other scenery to add variety. If you own a 3D printer, these can be printed really quickly too!

Instead of using objective markers, placing small items of scenery is the way to go. Adding small consoles, supply crates or other thematic objects such as broken droids or machinery parts is an easy way to enhance the narrative of your game.

Building a star-port often involves combining a number of other scenery or terrain sets such as Landing pads, cargo, buildings, loading machines, etc. it’s best to decide what kind of star port you want to build such as an imperial compound, off-world colony or Tatooine merchant port for example.

This could be an unmanned factory complex operated by droids or a run-down mega-factory on a poor desert planet. Large machines and smaller scatter offer great options for cover whilst pipes and walkways give opportunities for moving across the table.

A spaceship graveyard full of broken ships, New republic prison workers, cranes processing machinery and large sections of wreckage is a super-fun table to play on.

Market stalls and street vendors selling food, droids, ships and other wares make for an interesting game to play around. Larger kiosks can be used for full cover whilst tables and stalls offer cover bonuses.

There’s a lot of options for city building terrain in the Star Wars universe!

Battling through the corridors of a star destroyer, Rebel Alliance bunker tunnels or transport ship cargo bays is a unique experience and a LOT of fun. Modular spaceship terrain is easy to set up and playable interiors can have removable doors and line of sight blocking scatter terrain.

Attack and defend missions wouldn’t be the same without barriers scattered across the battlefield. the core set of Star Wars Legion includes a set of basic barricades but adding more options and larger, modular wall sections is another option for placing quick and easy terrain. Consider having different sizes and if you have a 3D printer, consider changing up the scale for variety.

The galaxy holds many ancient secrets and long forgotten Jedi temples. Ruins could feature sections of broken walls, half buried artifacts and sites of primitive rituals.

If you have access to a 3D printer, check out the range of terrain and 3D printable scenery at Saucermen Studios. There are many free STL files available as well as individual models and mega value bundles.